Vancouver, British Columbia--(Newsfile Corp. - May 27, 2020) -  First Vanadium Corp. (TSXV: FVAN) (OTCQX: FVANF) (FSE: 1PY) ("First Vanadium" or the "Company") is pleased to announce that it is seeking tenders to drill its gold target in the Carlin Gold Trend in Nevada later this summer. The gold target has been identified by Dave Mathewson, a former Newmont Regional Exploration Manager.

Key elements of the Carlin-style high-grade gold target are the location, people and supporting science:

Paul Cowley, President & CEO states, "We are now ramping up our planning to drill test this exciting target, guided by a proven mine finder, Dave Mathewson."

The accompanying figure graphically shows many of the supporting features of the target on the property within the southern portion of the Carlin Gold Trend. The figure on the left is the regional structural interpretation by Mr. Mathewson showing north-south and west-northwest trending structures. Many gold mines and deposits fall along the identified structures such as with the Emigrant mine, North Bullion and Pinion deposits and the string of deposits/mines along the Rain fault (Rain, Northwest Rain, Tess, Saddle). The figure to the right, at the same scale, shows those same structures, mines and deposits, superimposed on a regional gravity map. The coincidence of the linear gravity highs (red/purple colours) with these structures that host gold mines/deposits are clearly evident. The north trending structure that cuts through the Carlin Vanadium Property also demonstrates a similar coincident gravity high in the figure. 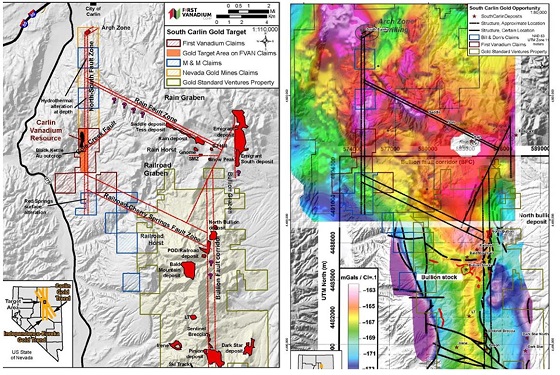 Mr. Mathewson is a former Newmont Mining Corporation Regional Exploration Manager. Mr. Mathewson was instrumental in several significant gold discoveries in the Rain and Railroad Mining Districts in the southern portion of the Carlin Gold Trend, where the Carlin Vanadium Project is located. During the early 1990's while at Newmont, Mr. Mathewson led the team which discovered the Tess, Northwest Rain, Saddle, and South Emigrant gold deposits in the Rain District, which total over 4 million ounces of gold. In 2009, he was a founder of Gold Standard Ventures Corp. (GSV-TSX and NYSE) and served as its Vice President of Exploration until 2015. During this period, his exploration team discovered the North Bullion gold and Bald Mountain gold/ copper deposits, as well as acquired the Pinion gold deposit, all in the Railroad District.

ON BEHALF OF FIRST VANADIUM CORP.
per: "Paul Cowley"
CEO & President
(778) 655-4311
This email address is being protected from spambots. You need JavaScript enabled to view it.
www.firstvanadium.com

Technical disclosure in this news release has been reviewed and approved by Paul Cowley, P.Geo., a Qualified Person as defined by National Instrument 43-101, and President and CEO of the Company.

To view the source version of this press release, please visit https://www.newsfilecorp.com/release/56616